The World Oil Supply Clock is available as a WordPess plugin or a simple line of code that can be added to any website.

The WordPress plugin benefits from a full control panel allowing users to change font colors and items to display.

Get Your WordPress Plugin Here

Or simply copy the following line of code into your web page. 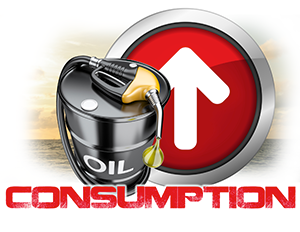 Population Growth: The current world population is 7.3 billion. That number is expected to keep climbing by about 80 to 90 million people per year. Larger populations are expected to increase global oil demand. [Worldometers]

New Technologies: New technologies that haven't yet been imagined will be developed to help our energy needs. The tighter the global oil supplies become, the greater the incentive for their development. [New Energy and Industrial Technology Development Organization, NEDO]

Renewable Energy: This is an area of the world's economy which will be seeing massive growth, both in usage and efficiency. Solar, nuclear, wind, geothermal, tidal, biomass, etc... While the developed world is just in the early stages of potentially shifting, there are not yet many signs of widespread adoption by developing and emerging nations. This will likely only change in most countries when they have little choice, or they enjoy a benefit (such as the energy being less expensive). [International Energy Agency, IEA]

Nuclear: While not technically renewable, nuclear energy could easily support the world's needs. The downside is the dangers associated, such as weaponization and radioactive meltdowns. [Wikipedia]

Economic Slowdowns: Much of global oil use is linked to economic strength. In a depression or recession, most nations would use less fuel, whereas when economies are strong, they use more.

Dishonest Reporting: Some nations hide their official reserve estimates, or purposely report incorrect or misleading data. For example, if OPEC nations may produce amounts based on their total reserves, so it is in their economy's interest to inflate their numbers. There are other situations where countries may benefit by reporting incorrectly. [Oil-Price.net]

US Shale Oil and Fracking: All the new U.S. production from shale oil is more of a temporary fix than a permanent solution. Most shale oil wells produce the majority of their resource within the first year or two, and yields continually, rapidly decline. [link to video - Bloomberg]

New Finds: New discoveries of potentially recoverable deposits add hope to the total potential supplies of global oil. Alaska, for example, and much of the Arctic, hold potential reserves which could be added to the global inventory. In cases where recovery is currently problematic, new technologies and increasing desperation may be required before the underlying reserves are harvested.

According to the Institute of Mechanical Engineers, there are 1.3 trillion barrels of proven oil reserve left in the world's major fields, which at present rates of consumption should last 40 years. This differs only slightly from British Petroleum's own estimates.